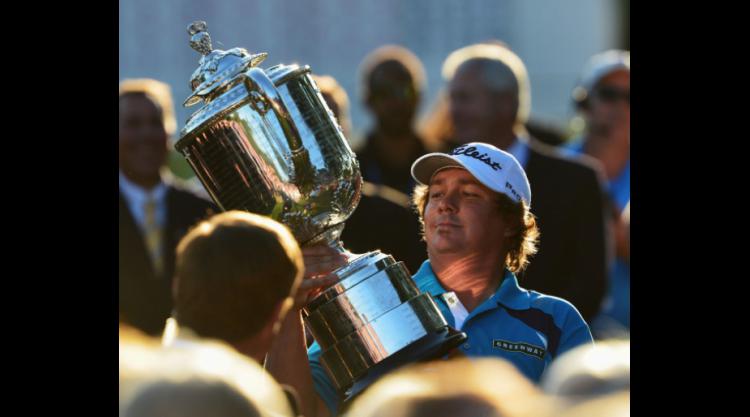 Jason Dufner set aside emotional scars from squandering a major title two years ago to win the PGA Championship on Sunday, holding off Jim Furyk despite a bogey-bogey finish.

The 36-year-old American, who had a four-shot lead with four holes to play but lost the 2011 PGA Championship, fired a final-round two-under par 68 to finish on 10-under par 270 for 72 holes, beating Furyk by two strokes.

"It's pretty neat to come back and win a PGA to be honest with you," Dufner said. "You always carry those scars with you."

Dufner won the Wanamaker Trophy and the top prize of $1.445 million from the $8 million event with the lowest 72-hole score at Oak Hill, breaking the mark of 274 by Jack Nicklaus at the 1980 PGA Championship.

"It's a great feeling to finally win one," Dufner said. "I can't believe this is happening to me. It feels really, really good. It's amazing to me this actually happened to me."

Dufner, who matched the 18-hole record low in any major with a 63 in the second round, went 26 holes without a bogey until the last two holes and by then it was too late to deny him the victory.

"The last two holes were unforgettable," Dufner said. "I wish I could have closed it out with no bogeys but I was glad to get the job done."

Among the first to congratulate Dufner was Keegan Bradley, the US rival who beat him in a playoff for the 2011 PGA Championship crown.

Furyk, the 2003 US Open champion, was second on 272 after shooting 71, making bogeys on the last two holes, which played the hardest of any this week at Oak Hill.

"I needed to keep the pedal down and make pars there and keep the pressure on him and I just didn't do it," said Furyk.

Furyk, who has not won any title since the 2010 US PGA Tour Championship, began the day with a one-stroke lead but failed to win just as he did four times when leading after 54 holes last year, including at the US Open.

Sweden's Henrik Stenson was third on 273 with countryman Jonas Blixt fourth on 274 after each shot 70 in the final round. Masters champion Adam Scott of Australia and American Scott Piercy shared fifth on 275.

Dufner began the back nine at 11-under after birdies at the fourth, fifth and eighth holes and a seven-foot par save at the ninth. An 18-inch par putt just curled into right edge of the hole at the 10th, a hint of the pressure contained behind his stoic face.

Furyk, with equally calm demeanor, birdied the par-3 sixth and took a bogey at the ninth, but then matched Dufner par for par on the back nine.

Furyk made a six-foot par at the par-3 15th but Dufner topped him from half the distance and led by two shots with three holes to play.

At the 16th, Dufner put his approach inches from the cup for a tap-in birdie but Furyk curled in a 10-foot birdie putt of his own to remain two back with two to play.

Furyk put his approach into the rough at 17 while Dufner was safely on the far side of the green from the pin. Dufner rolled his long putt three feet past the cup but Furyk found the rough just off the green with his third shot and chipped just past the hole, tapping in for a bogey.

At 18, Furyk found the rough twice but Dufner's second shot came up short of the green in the thick grass too.

Furyk blasted out, missed a 30-foot par putt and tapped in for bogey. Dufner chipped out to 15 feet and two-putted for the victory, kissing his wife Amanda and grabbing her rear in celebration as he walked off the 18th green.

South Africa's Tim Clark aced the 220-yard par-3 11th hole with a 3-hybrid, the third hole-in-one of his career and the first in a PGA Championship since 2010.

British Open winner Phil Mickelson stumbled to a 72 and a 12-over 292 finish while world number one Tiger Woods fired a 70 to finish on 284 for a share of 40th, matching last year's Masters for the worst 72-hole major finish of his professional career.