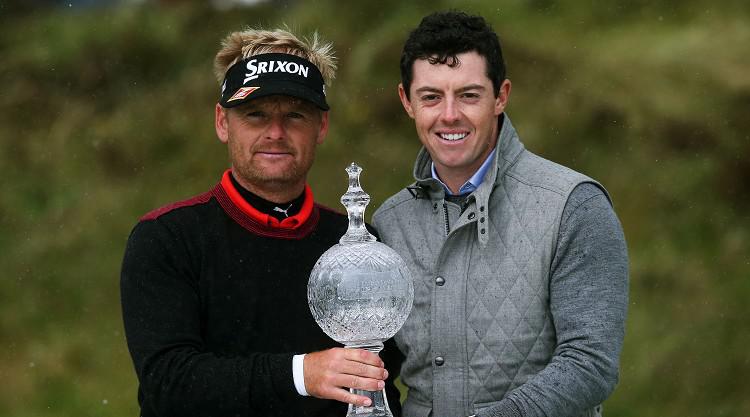 Three weeks after wondering if he was past his best, Denmark's Soren Kjeldsen was today celebrating a dramatic victory in the Dubai Duty Free Irish Open and a place in the Open Championship.

Kjeldsen finished 103rd on the Race to Dubai last season, his lowest finish since his rookie year in 1998, and was languishing outside the top 100 again after his first 10 events of 2015.

But after starting work with new caddie Alastair Mathieson at the Spanish Open, Kjeldsen celebrated his 40th birthday by finishing ninth in Barcelona, followed that with a share of 18th in the BMW PGA Championship and on Sunday held his nerve to beat Bernd Wiesberger and Eddie Pepperell in a play-off to win a fourth European Tour title.

"Three weeks ago I was 112th in the Order of Merit and my game was not in good shape," Kjeldsen said.

"With turning 40 you wonder was that it? Now I am standing here and it's pretty remarkable really.

"Alastair, who had worked with Geoff Ogilvy for 12 years, including his US Open win, was so encouraging and said from the start 'Soren, you should be doing much better and climbing the world rankings.'"

Kjeldsen took a two-shot lead into the final round and was one ahead with two holes remaining despite being four over par for the day as the players battled heavy showers and winds gusting up to 40mph at Royal County Down.

A three-putt bogey on the 17th left Kjeldsen needing to birdie the last to win, but after chipping from one side of the green off the other, he did well to get up and down for par and a closing 76 to join the play-off.

The players returned to the par-five 18th for sudden death and after finding the green in two and seeing his opponents fail to make birdie, Kjeldsen two-putted from 25 feet, although his birdie attempt did a full circuit of the hole before dropping.

"The last breath I took was on about the 14th," added Kjeldsen, who reclaimed the lead with his only birdie of the day on the 12th.

"I have never been as nervous as this in the other tournaments I have won.

"I had decided not to look at leaderboards but once I started dropping shots I started looking because it gave me a little pleasure that I wasn't the only one struggling because it was such a brutal day."

Kjeldsen claimed one of the three places available in the Open Championship to players finishing in the top 10 who were not already exempt, with Pepperell and Tyrrell Hatton taking the others.

Pepperell had set the clubhouse target on two under after a remarkable bogey-free 69, with Wiesberger missing from eight feet for what would have been a winning birdie on the 18th in his closing 73.

Spain's Rafael Cabrera-Bello missed out on the play-off - and with it a place in the Open - after a bogey on the 18th, with Hatton alongside Cabrera-Bello on one under after a par on the last in a closing 74.