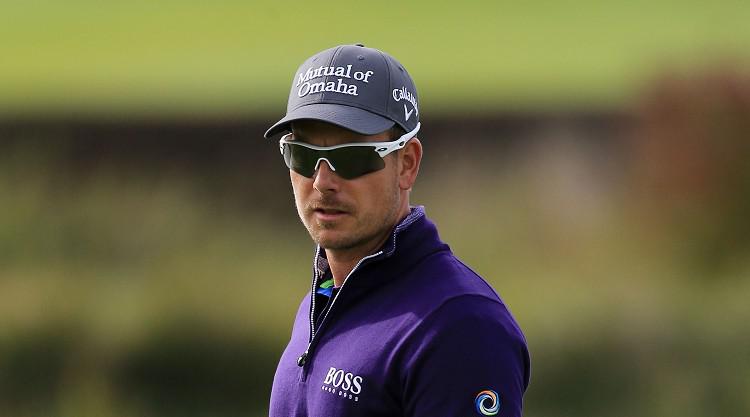 Henrik Stenson claimed a one-shot lead over Rickie Fowler going into the final round of the Deutsche Bank Championship in Massachusetts after a third round of 65 on Sunday.

An eagle at the fourth hole was the highlight of the Swede's six-under-par round at TPC Boston, which led him to a 13-under-par total for three rounds.

That kept him ahead of Fowler, who fired a third successive round of 67. Sean O'Hair and Matt Jones shared third place on 11 under, with Scotland's Russell Knox a further shot back and completing the top five ahead of Monday's final round.

Stenson struck his tee-shot at the third to six feet to set up birdie, then drove the green at the 298-yard par four which followed and judged a 20-foot right-to-left putt to perfection.

Further birdies followed at the seventh and ninth for a front half of 31, while the back nine was a quieter affair.

He was relieved to see his par putt at 16 slip in the side of the hole, having dropped his club to the ground in frustration at an apparent miss, and celebrated with one final birdie at the 18th.

Fowler's round was similar, with four birdies on the front nine and pars all the way after the turn - a return to the sedate progress of round one, following Saturday's chaotic round when he needed eight birdies to offset two bogeys and a double.

O'Hair also carded 67, with a birdie-birdie finish having picked up his other two shots much earlier, at the first and third holes. Jones, the rising Australian, produced a three-under-par 68 with five birdies and two dropped shots.

Knox was out in one over par, with bogey at the ninth, but got the shot back at the first time of asking and surged into contention with three birdies in the last four holes.

Danny Lee and Hideki Matsuyama were the stand-out names in a group of five players at eight under which also included Americans Jerry Kelly, Daniel Berger and Kevin Chappell.

Charley Hoffman, who had led the tournament after a superb second round of 63, fell away to seven under with a five-over-par 76 featuring six bogeys on the front nine.

Jason Day, seeking a third successive win following the US PGA Championship and The Barclays which would see him overtake McIlroy for the number one spot, had a disappointing round of 73 to leave him off the pace at four under.

England's Paul Casey withdrew before the start of the round with a back problem. He had made the cut at level par.